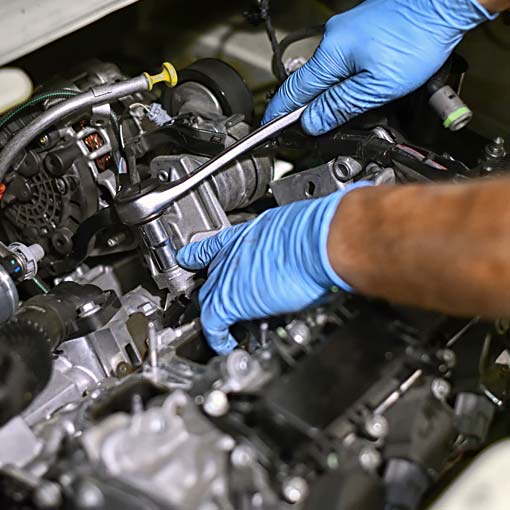 T here are numerous ways that faults can occur with vans here we focus on some off the common faults and those that can end up being most expensive.

Typically, the faults that we see the most are:

A mechanical fault often strikes unexpectedly and can be difficult to diagnose. Often the symptom can relate to one of several different problems but at Volksmaster we can often pinpoint the cause quickly because of the skill and experience of our technicians.

The Importance of Cam Belt Replacement in Vans

Cambelts are also known as timing belts/chains are an essential component to the running of the van. The belt makes sure that the crankshaft and camshaft are synchronised and that they rotate together at the right time.

A cam belt should be replaced regularly in line with manufacturer’s guidelines. This is often around 50,000-80,000 miles. The failure to replace the cam belt is one of the most common reasons for a van to fail.

Over the last 2 decades diesel vehicles have had DPFs fitted to help reduce their emissions. The DPF captures and stores any excess soot and this will need to be burned off (emptied) regularly. The process, known as a “regen”, protects the environment by eliminating the black smoke that we used to see coming from the exhausts on diesel vehicles.

A light will display on the dashboard if the DPF becomes clogged. If the van does a lot of city driving these “regens” will be more frequent as soot doesn’t clear easily on short, slow journeys. Irregular servicing of the DPF is the main source of soot accumulation. If the van is unable to do its own “regen” this is done in a garage with specialist equipment.

The Electronic Control Unit (ECU) is essentially the brain of a modern van which controls the functions through computer programming. There are lots of ECUs within a single van which control specific functions like brakes, suspension, transmission and so on. For example, the Engine ECU will make sure that all the parts and sensors in the engine work in harmony to control and manage engine function.

There are a variety of faults that can occur with ECUs on vans. Some are actually produced with the fault in situ or with an ECU that is likely to develop a fault in time. ECU faults are more irritating than expensive but they can cause issues serious enough to make driving the van a danger.

Common ECU failures which may originate from various modules include power steering, sunroof failure and problems with gauges and instrument panels. In some models the location of the ECU causes problems because of exposure to water or heat.

The Role Played by the Gearbox in Vans

As in other vehicles the gearbox acts to change speed and torque and is affected by load and terrain. The gear box may be manual or automatic but they both work in the same way – the conversion of speed to torque. A gearbox controls the van in using forward, neutral and reverse gears. There are usually between 4 and 6 forward gears.

There can be a variety of reasons why a gearbox fails but one of the most common is lubrication problems. A lack of gear oil is one reason, or perhaps the oil has been contaminated. If the wrong lubricant is used this will also cause problems. A lack of lubrication means that metal will contact metal causing abrasion damage. A blocked oil filter can cause bearing and gear tooth damage. Other common gearbox problems include leaking oil, loose gears and alignment problems. Automatic gearboxes tend to produce more complex problems that their manual counterpart.

The Importance of Oil Pressure in Vans

If the oil pressure warning light goes on it means there has been a loss of oil pressure and the driver should pull over immediately. This light indicates that it is dangerous to continue to drive on without checking the level with the dipstick.

Oil level may have become low due to a leak, low viscosity, high oil consumption or a worn oil pump. There are a number of other issues that can affect this too. Whatever the cause, the driver needs to take immediate action to avoid catastrophic levels of engine damage and avoid the van being written off because it is beyond economical repair.

These are some of the more common reasons why a driver may experience low oil pressure:

What does the Fuel Pump do?

The fuel pump does what it says it does – it pumps the fuel into the cylinders of the engine. The fuel filter prevents any sediment entering the fuel pump. Although it is a simple role, the fuel pump is essential to the efficient running of the van.

A blocked fuel pump is often due to wear and tear. The motto here is ‘prevention is better than cure’ so making sure that the fuel filter is regularly replaced is a cheap way of preventing problems. A blocked up filter will allow contaminants through the fuel pump, causing damage and failure.

Tell-tale Signs of a Van with a Damaged Fuel Pump

The signs of a damaged fuel pump are varied. Firstly, the van may fail to start because fuel cannot reach the engine. Another sign is when the engine starts to splutter; the van moves jerkily especially at speed. There is often a loss of power experienced when trying to accelerate. The fuel pump may need to be repaired because of wear and tear where the van will suddenly surge because the amount of fuel being delivered is not regular.

Why are Fuel Injectors Important?

fuel injectors will block over time so cleaning them every 25,000 miles is recommended. This needs to be done more often with vans, in particular diesel vans where a lot of inner-city driving is done. Sometimes the check engine light will come on but unless the diagnostician is very skilled it is very hard to ascertain whether this is due to a failed fuel injector or has some other cause.

There are several ways that the efficiency of the van can be compromised but one of the key signs is the engine misfiring. This problem is obvious and the driver will be more aware of it when accelerating or idling – the van’s engine and revs will be rough and inconsistent in speed. There can also be a loss of power when trying to accelerate.

If you’re experiencing problems with your van the Volksmaster Van Service Centre can help, our technicians specialise in van servicing, repair and problem diagnosis. Our experience ensures diagnosis is accurate and the repair is carried out efficiently. Though no work will be carried out until you the customer have been fully informed of the problem and we get your approval to complete the necessary work to get your van back on the road. You can make a booking now by completing the short form below or give us a call now – 0161 628 5270.